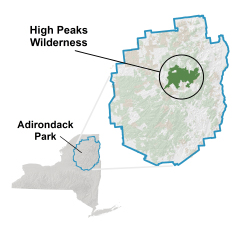 For some hikers, summiting all 46 peaks only takes a few days; for others it takes a lifetime. The High Peaks of the Adirondacks provide more than just scenic views; but a chance to join the roster of the ADK Forty-Sixers. These 46 peaks are the highest in the park with elevations over 4000 feet based upon Russell M. L. Carson’s Peaks and People of the Adirondacks (ADK 46ers). (Since this publication, geologic records have corrected some of Carson’s findings, noting that four of the peaks have elevations under 4000 feet and one peak previously unlisted is actually above this height. But due to tradition, the original list has not been changed.) Hiking these high peaks provides individuals, both young and old, with breathtaking views, scenic wildlife, and a sense of completion.

The Adirondacks are unique among the mountain systems around them including the Green and White Mountain Ranges. The Adirondacks are clustered in a dome rather than an elongated system like the Appalachian Mountains. This creates a unique opportunity for hikers to focus on climbing individual peaks rather than thru-hiking a connected range. While hiking in the Adirondacks has been common for centuries, the first recorded hikers to summit all the peaks were the Marshall brothers and Herbert Clark in 1925. Soon after, many other hikers worked towards the goal of hitting all 46 peaks. This trend inspired the creation of the Adirondack Forty-Sixers, which records those who summit the peaks as well as exposes the park to a larger audience. The club evolved from the Forty-Sixers of Troy, which was formed by Rev. Ernest Ryder and Ed and Grace Hudowalski (Heaven Up-h’isted-ness). Thousands of hikers have joined the roster and the high peaks region is now more popular than ever. The High Peaks region is one of the most visited areas in the park and certain peaks experience a lot more foot traffic than others. This is evident on Mount Marcy, with an elevation of 5,344 feet, where during the height of the summer season there can be upwards of 100 hikers who summit in a day. For peaks like Marcy, an increase in foot traffic also means a greater risk of environmental degradation. This has become an increasing concern for the high peaks region. 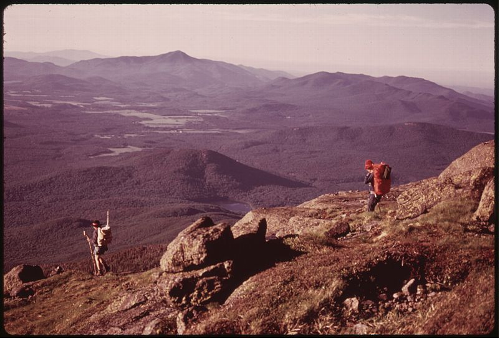 The ADK Forty-Sixers are not only concerned with how many summits they have completed, but also the preservation of these mountains and surrounding wilderness (ADK 46ers). The High Peaks region is one of the wildest areas in the Adirondack Park, but also one of the most visited. This may seem like a contradiction because it is a difficult to balance preservation and tourism. The High Peaks Wilderness Area is protected by the New York State Department of Environmental Conservation, but relies on the work of many local hiking groups for upkeep (High Peaks Wilderness Region). Conservationists have worked hard to help protect this area through programs like the ADK High Peaks Foundation and the Adirondack 46R Conservation Trust. These organizations help support the preservation of the landscape and educate others on the history and importance of these ecosystems. Educational endeavors are targeted at the hikers of the high peaks because they are the most popular summits (Summit Steward Program). Conservationists continue to encourage the protection of this area while also encouraging safe and responsible exploration.

The ADK 46ers have successfully promoted and maintained a network of trails throughout the High Peaks Region (ADK 46ers). This has allowed both experienced and new hikers the opportunity to explore a geologically unique mountain range in the Northeast. The history of the region and club is rich with adventure and passion. While the sport of 46ing encourages hikers to reach every summit, this is not the sole value of the club. In the words of Grace Hudowalski (#9), “it’s not whether you make the summit, it’s how you do the climb” (12, Heaven Up-H’isted-ness).