Grace Dolbeck Leach Hudowalski, the first woman to hike all 46 peaks, was a pioneer in the creation of the ADK Forty-Sixers and many of the traditions associated with the club. Grace was born in Ticonderoga in 1906 and spent her childhood in and around the Adirondacks. In 1926, Grace married Ed Hudowalksi, who was studying to become an electrical engineer at Rensselaer Polytechnic Institute (Heaven Up-h’isted-ness!). While both Ed and Grace maintained office jobs, they shared an appreciation of the Adirondacks and spent much of their free time exploring and protecting the park. Grace became the 9th recorded individual and first woman to finish all 46 peaks. She started with Mount Marcy in 1922 when she was sixteen, and finished with Mount Ester in 1937 (Grace Leach Hudowalski). Grace conquered these peaks at a time when hiking was seen as a masculine discipline, but she was not afraid to pursue the call of the mountains. Perhaps nothing describes Grace’s love of the Adirondacks more than the poem she wrote which was published in The Cloud Splitter in 1939: 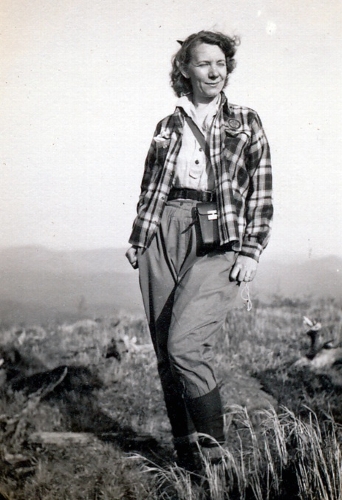 To meet the softly tinted skies,

And with the hills abruptly blend;

While o’ver the hillsides’ dotted green

Embraced by every breeze that blows.

Where peace and beauty reign supreme –

I claim these mountains for my own.

In 1937 Rev. Ernest Ryder of Grace Methodist Church, along with Grace and Ed, organized the Forty-Sixers of Troy, a club to promote the High Peaks and keep a record of who had summited them all (ADK 46er). The early club was small but Grace wrote letters back and forth with the hikers in order to record their summits and learn more about their adventures. While club members were mostly from the Troy congregation, the excitement about these peaks soon traveled across New England and the Forty-Sixers of Troy expanded to become the Adirondack Forty-Sixers in 1948. Grace served as the first president of the club from 1948-1951. Shortly after the creation of the club, Grace started to correspond with hikers about their journeys up these peaks (ADK 46er). She knew that each peak, much like the hikers, had a story to tell and that through these letters she could learn more about the characteristics of each mountain. After serving as president, Grace became the historian of the club and continued to write thousands of letters over the next 50 years. Grace’s effort to continue correspondence with the many hikers is one of the lasting traditions of the club. Without any children, Grace valued her correspondence with the hikers and would often discuss more than just the high peaks in her letters. Grace served as a mentor for many hikers, young and old. Today it takes over 20 volunteers to respond to these incoming letters (Grace Leach Hudowalski). Volunteers continue this correspondence because it not only chronicles the history and evolution of the club but also has become a time-honored tradition. Many of Grace’s letters are housed in the New York State Library Manuscripts and Special Collections. Grace Hudowalski is not only a role model for her dedication to the Adirondacks, but also an integral part of the park’s history (Grace Leach Hudowalski).

Grace was also instrumental in the conservation efforts involving the 46 peaks. She established the Adirondack 46R Conservation Trust in 1995, which is a private endowment to support conservation and educational efforts in the High Peaks Area (Adirondack 46R Conservation Trust). This trust helps fund the Summit Stewards program, which trains individuals to educate the public about the fragile ecosystems on the high peaks and work on restoration programs.  This trust focuses on many of the principals Grace valued, including stewardship and respect for the landscape. (Grace Leach Hudowalski).

Grace holds a valuable place in the history of the ADK Forty-Sixers. Her many achievements were recognized in 2004 at the Adirondack Mountain Club’s annual banquet where Grace was awarded the Trail Blazer Award. But that same night Grace died at the age of 98. In honor of her dedication to the Adirondacks, East Dix (#42) was officially renamed as Grace Peak in 2014 (Brown). Grace is a role model for both hiker and woman. She possessed a love and respect for the mountains that she shared with all enthusiastic hikers. Not only did Grace value the sport of 46ing, but she also worked hard to ensure the peaks were protected. Grace’s love of storytelling and dedicated correspondence with hikers has provided an in-depth look at the changing culture of the High Peaks and the ADK Forty-Sixers.