Presence of Trail Damage and Congestion 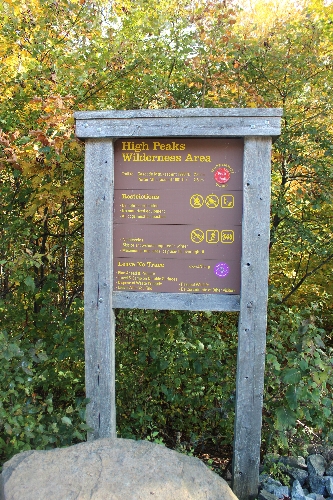 The High Peaks provide some of New York’s greatest hikes, but this popularity can cause overcrowding and ecological damage to the area. During the summer, many of the high peaks attract a large number of hikers. Not only do the trails become congested, but the campsites surrounding the most popular peaks are full. This popularity can easily be seen atop Mount Marcy and in the surrounding areas like Marcy Dam (McMartin). Here it is difficult to find a tent location free of human distraction or to hike up to the peak without encountering other individuals.  Not only does this hinder an individual’s aesthetic enjoyment of an area, but also can disturb the surrounding ecosystem. Some of the disturbances include trail damage as well as pollution and littering in the campsites. While trail degradation occurs all along the different trails, it is often heightened at the summits because of the fragile alpine ecosystem (McMartin). Trail damage can include erosion, vegetation destruction and soil compaction. Overcrowding is not an issue with the entire park, but mostly with the popularized high peaks. In other areas of the park, you can hike for many miles and never pass another person. This raises the question of whether hiking clubs should still encourage individuals to aim for the most popular peaks, or suggest that hikers explore the surrounding area like the lower 54. The Adirondack Forty-Sixers understand this dilemma and are concerned with the conservation of the park (ADK 46ers). Many members of the club educate others about the protection of the wilderness areas and volunteer with trail upkeep.