The Moose (Alces alces americana) is one of the most iconic figures in the Adirondack Park. Moose are also one of the best suited species to deal with the winter in the Adirondacks. The massive body size of the moose gives them one of the lowest surface-area-to-volume ratios, which means they lose much less of their body heat than other animals do. The Moose features long legs and large hooves which allow the animal to maneuver in up to 36 inches of snow. Their massive body size combined with their hollow-hair outercoat as well as the Moose’s dense undercoat, enable these mammals to endure temperatures of -22°F and below. The Moose is so well adapted to the winter that they actually need to seek locations in the Adirondacks to keep them cool. During the winter months, Moose will spend most of their time under the shade of mature and coniferous forests, which serve to cool the Moose off with the forest’s shade as well as to reduce the snow height to ease the moose’s winter movement. 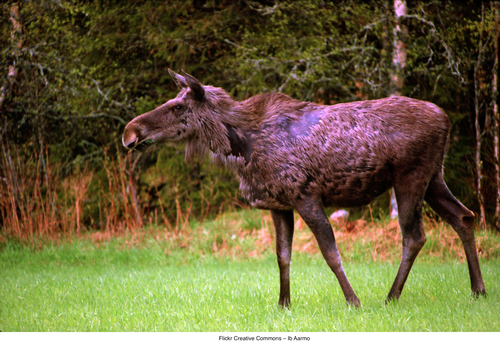 Because Moose don’t hibernate they have to browse what little remains on trees and shrubs in the winter for food. Like deer, Moose have a “second stomach” or rumen chamber which allows the animal to consume wood and other woody materials. This stomach gives the Moose a virtually unlimited supply of food in the Adirondack forest as well as the digestion that takes place in this rumen chamber generates more heat than the animal’s resting metabolism. Moose also tend to organize in groups in the fall and winter much more than they do in the spring and summer when they become mostly solitary animals. The iconic antlers of the Moose have a remarkable, annual cycle of commencing growth in the spring, reaching their full size in the fall, and then falling off the Moose’s head in the winter.