Black-capped chickadees (Poecile atricapillus) are small birds native to the Adirondacks weighing 10-12 grams. They’re active every day of the winter, meaning warmth and energy conservation are big priorities. They can keep their day-active body temperature at 107ºF even when the air is as cold as 32ºF, but to do so means the chickadees have to consume high amounts of oxygen and spike their metabolic rates. Black-capped chickadees are also fortunately endowed with a dense coat of feathers, known as their plumage. They actually lose most of their body heat around their eyes and bill. When they get ready to sleep, chickadees fluff their feathers, ball up, and tuck their heads below their shoulders specifically to minimize this heat loss. 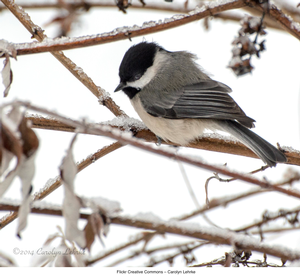 Chickadees don’t build winter sleeping shelters, but they are sufficiently flexible to stuff themselves into any tight space that might keep them safe from cold winds (overnighting). They like to sleep in trees, and the smaller the space, the better. That’s why you might see one with the bird equivalent of “bed head” the morning after a restful sleep. Black-capped chickadees nest in tree cavities or abandoned woodpecker holes, and make their nest more comfortable with soft materials like mosses, feathers, furs, and plant fibers. Bird experts say that a warm place to stay at night is more critical to chickadees than being well fed.

During winter, the black-capped chickadee bulks up in fat. Fat has more than twice the caloric content as carbohydrates, so for long-distance travel or long periods of exercise, birds usually switch from carbohydrate to fat metabolism. Chickadees bulk up in fat as much as possible during the day, reaching about 7% body fat by the evening. At night, they begin to burn as much fat as possible to keep their body temperature high and stable. One study showed that their body fat was reduced to 3% by the next morning.

This is a strange adaptation for the black-capped chickadee because most birds will only fatten up if they need the energy for migration or to survive in the cold during food shortages. Yet chickadees, for the most part, have an available supply of food and have just found it evolutionarily advantageous to depend on fat metabolism.


Still, the chickadee can only gain so much fat during the day. If temperatures get below 32ºF, which they certainly can, the chickadee will adapt by lowering its body temperature to close to 87ºF. This 20 degree drop from its normal day-time temperature reduces metabolism, but is usually sufficient to make fat reserves last the night. Like the deer mouse and plenty of other Adirondack species, the black-capped chickadee will shiver vigorously throughout the night to stay warm. The combination of reduced metabolism and shivering are signs of going into regulated hypothermia - an energy-saving step just shy of hibernation. 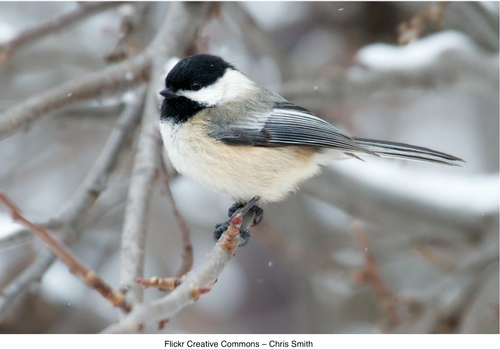