Skiing in the Adirondacks began when Herman “Jackrabbit” Johannsen introduced Nordic skiing to the park. Credited with bringing skiing to the Americas from his native Norway, initially moving to Québec before moving progressively southward into the northeastern United States and in particular the mountains of the Adirondacks (Goodman, 1997). Though, Jackrabbit Johannsen and his initial early 1920’s technology lacked the ability to readily summit the then undeveloped terrain which we now consider typical ski areas, it wasn’t long before adventurers (Jackrabbit himself included) began bringing skis on their excursions and skiing downhill. They utilized the same form and style of ski and binding as cross-country skiers, with a free heel attacked only at the toe, a style known now as telemark skiing, and still readily 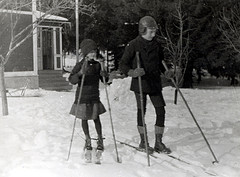 used by backcountry enthusiasts. In 1932, Lake Placid welcomed the most prestigious form of winter athletics to the Adirondacks with their successful bid to host the Winter Olympic Games. While the event boosted Lake Placid and the Adirondacks to global recognition as a winter destination, it did little to directly promote alpine skiing. There were no  alpine events at the game, and so while the nordic trails and bobsled infrastructure received a direct infusion of money and resources from the State of New York, development moving upward in elevation was overlooked. But by that time, Jackrabbit was already plotting trail cutting on Whiteface Mountain and leading excursions to various mountains (most famously Mt. Tremblant in Québec) and advertising their potential to investors (Fry, 2006). Buoyed by the excitement following the Olympics, ski advocates managed to pass legislation in the 1941 amendment of Article XIV of the New York State Constitution allowing for alpine ski trails on Whiteface Mountain. Though Jackrabbit Johannsen preferred climbing to the chairlift, he died happy at the age of 111, having over seen and facilitated the establishment and evolution of his life’s passion as a nation-wide (and world-wide) passion and crux of modern tourism, both inside the Adirondack Park and beyond.

Whiteface Mountain grew in popularity and expanse in the post-war period when americans began to seek adventure in wild spaces. When Lake Placid won the rights to host it’s second Winter Olympic Games in 1980, a powerful influx of resources and development returned, revitalizing the town and this time extending to 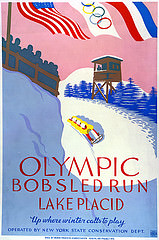 Whiteface (itself in nearby Wilmington), which was charged with hosting the now numerous downhill ski competitions (Rielly, 2014). Whiteface as a resort received major upgrades in the form of lodging and nearby development. The mountain was not expanded in terms of trail count, but the infrastructure in Wilmington and Lake Placid, funded by both public and private cash, surged with the promise of steady business and a stable investment, even after the games were finished. In order to secure the success of Whiteface and other Olympic facilities, the State Government established the Olympic Regional Development Authority, or ORDA. According to Adirondack Almanack writer Kimberly Rielly, it was these developments which are directly responsible for the current resort experience even now, 34 years after Lake Placid and Whiteface hosted the competition.