The camps often started as a tent and evolved into a growing group of buildings, each with their own function. They gained significance largely through William West Durant, who played a significant role in molding a new architectural style. Influenced by various European styles, Durant gave the common Adirondack cabin a certain elegance. Other architects soon followed suite, designing camps with the rustic architecture specifically in mind. This resulted in camps that masterfully blended styles to create the Adirondack Style, a style later adopted across the country.

The style relies heavily on the environment in which it is found, as it attempts to blend practicality and harmony with the surrounding landscape. Easily accessible granite works well for building a base that protects the wood above it from ground dampness. Meanwhile, the immense supply and variety of wood in the Adirondacks makes it a natural choice for building material. To avoid heavy snowfalls, oversized timbers support roofs, which tend to extend far beyond the exterior walls (Kaiser 10-13). In addition to using a variety of tree sizes, great camp buildings utilize certain species for specific portions of structures. Spruce for instance, is best for roof boards, while birch, beech, maple, and fir work best for floors and stairs (Kaiser 66). The logs used require highly experienced workers though, as things like intricate corner notchings require a certain level of expertise. 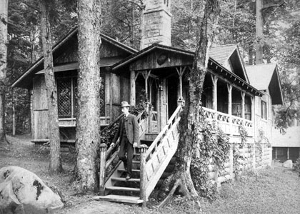 In 1876 and 1877, William West Durant transformed his father’s camp at Raquette Lake into Camp Pine Knot. Although not formally trained as an architect, Durant enjoyed building. In building Pine Knot, he molded Adirondack, English, Swiss, and Japanese styles, among others (adkmuseum.org).


The features that Durant borrowed were made to fit the surroundings. For instance, Durant covered ceilings and walls with birch bark and used unpeeled limbs and branches for railings. He similarly decorated the gables and verandas, features of Swiss architecture (Kaiser 79). Although rustic in feel, his camp was designed for human comfort, as shown by the abundance of decorations and convenient arrangement of walkways and buildings. This was the first camp that he built, but certainly one that holds significance in the context of the Adirondack Style that we refer to today. 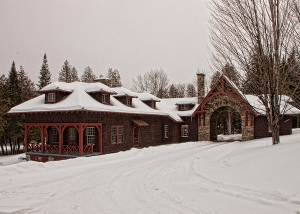 Robert C. Pruyn started construction of Santanoni in 1888 and continued improving it for a few decades. In 1970 it was acquired by the state of New York and appears to have an uncertain future. Nonetheless, it offers valuable contrasts to an earlier camp like Pine Knot.

The camp, while influenced by many outside sources, has been praised for its rustic look. Santanoni’s simple, rustic looks mimic both Adirondack and Japanese styles. It also mimics the stave churches of Norway through a black stain applied to the logs of the building. Unlike Pine Knot, Santanoni is far more centralized, unified by a network of connected passageways and verandas. It also contains interesting structures like two-story gable screens. Santanoni exhibits the incredible creativity and variety involved in Great Camps (Kaiser 174).