“Compared with the light that is projected on the screen, setsumeisha breathe life into the projected images.” – Matsuki Kyoro (Dym 226)

When a moviegoer attended a Japanese silent film, the most entertaining and important part of the experience was not the film itself but the benshi performer’s setsumei, his vocal narration. The first part of the performance was his maesetsu, entertaining introductory remarks that explained the content of the film before the film rolled and he gave his main setsumei, also called nakasetsu. The maesetsu provided the benshi with the best opportunity to demonstrate his oratorical skills. Since the playhouses were not dark during the maesetsu, performances were both auditory and visual. Benshi used costumes and body acting, giving the maesetsu a loose, comfortable atmosphere. With the Pure Film Movement’s elimination of maesetsu, however, nakasetsu had to evolve, offering background information and explaining the film simultaneously. The benshi no longer needed to be seen, and so setsumei became more one with the film. 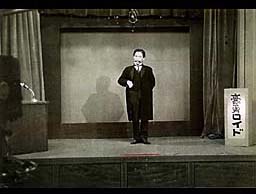 The benshi had to accomplish three things with the power and art of his setsumei. First, he must act out the dialogue in the film and narrate events between dialogues. According to Tokugawa Musei, one of the leading benshi of the times, one’s expression must always be enthusiastic. A successful benshi embodied the characters and needed “not a great memory, but rather the ability to assimilate expressions unconsciously, so that they instantly fly into the forefront of his consciousness whenever something triggers them” (Dym 187). The combination of the stream of consciousness narration with certain techniques like flashbacks and hallucinations highlighted a character’s inner state, creating a great psychological depth. For example, in the film Orochi, yakuza Heizaburo kidnaps and plans to rape the young girl Otsu. The benshi Matsuda Shinsui narrated not only Otsu’s pleading dialogue but also Heizaburo’s inner moralizing dilemma, further enriching Heizaburo’s character (Standish 102). Some critics and top benshi, however, argued against using voice-impersonating techniques (kowairo) for foreign films because it was considered to be discordant with the foreign and sophisticated images. They believed kowairo should strictly be used for domestic films, where such a style had already long been present in theater, like in the noh and bunraku tradition.

Second, a benshi had to analyze and criticize the events unfolding on the screen quickly and intuitively and present his interpretation to the audience through his setsumei. In preparation for narrating a film, a performer might conduct research in libraries on certain topics raised in the film, discuss said topics with scholars, or, if the film was an adaptation, read the original text it was based on. A screening could thus be highly educational based on how well researched the benshi’s setsumei was. A benshi could then write his own script to follow when narrating the film or use one that had already been written and published. Not all benshi, however, relied on a script when giving a performance. In fact, reading from a script was discouraged because the audience believed it threw off the harmonization with the film. Some benshi performed a setsumei cold without previewing the film beforehand, a practice called mizuten, or literally “doing without seeing.” The combination of preparing a script and of improvisation consequently led a benshi’s setsumei to constantly change and evolve from performance to performance and for multiple benshi to have quite contrasting setsumei for the same film. Japanese competitiveness led theaters to alternate benshi for each screening of the current film so that audience members could choose to attend based on when their favorite benshi was scheduled to perform. Theaters even switched benshi during the middle of the film so as to directly pit their setsumei against each other, as well as provide relief since narrating was extremely exhausting. Due to the benshi’s narrative skill, the production of films placed little emphasis on writing good, sound scripts because the benshi performer was expected to smooth over any awkward moments in his setsumei. Scholars of early film Châteauvert and Gaudreault envy how the “spectators of early cinema could feel the exhibition system in all its thickness, and the presence of the lecturer notably made them aware of how the spectacle they were attending was a unique event that would never be exactly replicated anywhere else" (Hovet 331).

Third, a benshi’s setsumei must lead the audience in a common emotional response. A good benshi, says Musei, blended speaking with visual images so that the “audience melted into the film” (Dym 151). He must be able to make the uninteresting film interesting and master the art of deception over his audience (Dym 55). Abe Nornes, a professor of film and Asian Languages and Cultures at the University of Michigan, argues that with his setsumei, a “benshi thus divests the powers of interpretation from the audience” (118). The spectator, however, is not an empty vessel waiting to receive the benshi’s interpretation nor is he idle. Rather, he collaborates with the benshi, both analyzing the film and critically receiving the benshi’s own analysis in the form of the setsumei. The art of setsumei, at its most refined, embellishes upon an audience’s initial reception of a film, guides them, and leaves them in a heightened state of contemplation long after the film’s close.